Frankie GtH - Welcome to the Pleasuredome

The lyrics of the title track, along with 'Relax', made Frankie Goes To Hollywood a media sensation as pop’s new Bad Boys, with banned records, banned videos and the usual crop of sensational quotes and moral hysteria.

The lyrics of the title track were inspired by the poem Kubla Khan by Samuel Taylor Coleridge. While criticized at the time of release and afterward for being a song that glorifies debauchery, the lyrics (and also Power of Love) make clear that the point of the song, just as Coleridge's poem, is about the dangers of this kind of lifestyle.

Nevertheless; the artwork on the gatefold and the original back cover might still be debatable.

Due to all hysteria, later issues of this very succesful album have 34! leaves added to the image to diguise the genitalia. 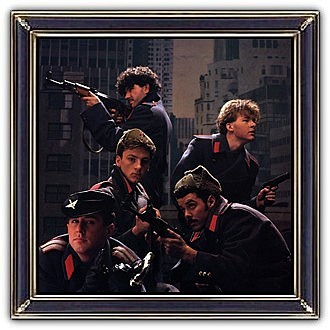 The group's 1983 debut single "Relax" was banned by the BBC in 1984 while at number six in the charts and subsequently topped the UK singles chart for five consecutive weeks, going on to enjoy prolonged chart success throughout that year and ultimately becoming the seventh best-selling UK single of all time. It also won the 1985 Brit Award for Best British Single. After the follow-up success of Two Tribes" and The Power of Love, the group became only the second act in the history of the UK charts to reach number one with their first three singles.