Elvis' 1957 Christmas Album reveales a different side of the rocker for the first time on a public instead conditioned to expect something outrageous. Neverthesless there was a controversy with Irving Berlin. After hearing Presley's version of his 'White Christmas', he ordered his staff to telephone radio stations across the US, demanding the song be discontinued from radio play. Most US radio stations ignored Berlin's request but at least one disc jockey was fired for playing a song from the album and most Canadian stations refused to play the album.

Even rarer than the cover and record itself is a gold foil price tag-shaped 'gift giving' sticker attached to the shrink wrap, reading "TO _____, FROM _____, ELVIS SINGS", followed by a list of the tracks.

Original copies with the gold sticker intact on the shrink wrap have proven to be among the most valuable of Elvis' albums. Adding to its already high value are limited red vinyl albums and album covers with gold print down the spine. Record labels for all original 1957 pressings are black with all-silver print, the famous "His Master's Voice" dog logo at the top of label, and "LONG 331⁄3 PLAY" at the bottom. 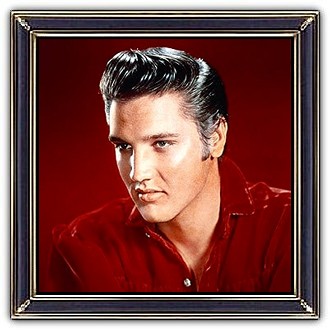 Presley is one of the most celebrated and influential musicians of the 20th century. Commercially successful in many genres, including pop, blues and gospel, he is the best-selling solo artist in the history of recorded music with estimated record sales of around 600 million units worldwide. He won three Grammys, also receiving the Grammy Lifetime Achievement Award at age 36, and has been inducted into multiple music halls of fame.