The album cover, photographed by Joel Brodsky, depicts a group of street performers in New York (Inspired by the 1954 circus film 'La Strada') . The availability of such performers was low, so Brodsky's assistant stood in as a juggler while a random cab driver was paid $5 to pose playing the trumpet.A dwarf was hired, appearing on the front cover and the back cover.

However, a group shot of the band does appear on a poster in the background of both covers, bearing captions of the band and album name. (The same photograph previously appeared on the back cover of the band's debut album - also a 1967 album!) Because of the subtlety of the artist and album title, most record stores put stickers across the cover to help customers identify it more clearly.

The sleeve depicts the bandmembers and the lyrics.

The location of the photograph is at Sniffen Court, a residential alley off of East 36th Street between Lexington and Third Avenue in Manhattan, New York.

However it seems that the front and back are one single shot, there's an overlap and the 'dwarf' is depicted twice. 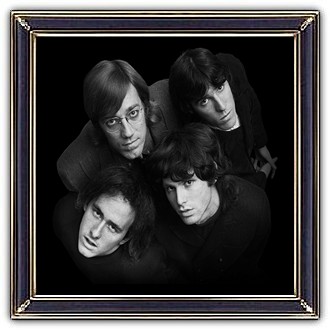 The Doors were an American rock band formed in 1965 in Los Angeles, with vocalist Jim Morrison, keyboardist Ray Manzarek, guitarist Robby Krieger and drummer John Densmore. They were unique and among the most controversial and influential rock acts of the 1960s, mostly because of Morrison's lyrics and charismatic but unpredictable stage persona. After Morrison's death on 3 July 1971 at age 27, the remaining members continued as a trio until disbanding in 1973.