Supertramp - Even in the Quietest Moments

'Actually, the cover photo of a snow-covered piano standing on a mountain gives a good indication of what the album sounds like: it's elegant yet mildly absurd, witty but kind of obscure.' Despite this All Music quotation, there are some more connections between the cover and the music. But also some un-answered questions.

The photo, taken by Bob Seidemann, is not doctored. The grand piano was really placed on the mountain top of Eldora Mountain Resort; a ski area near Caribou Ranch Studios. It must have been very quiet there! Only a fool is willing to play there, which brings in some questions about the partiture that is placed upon the grand piano:

Fool's Overture is the 11 minutes, epic last track of the album. This track is a collage of progressive instrumentation and sound samples. First there are excerpts of Winston Churchill's famous 4 June 1940 House of Commons speech regarding Britain's involvement in World War II ('We shall go on to the end... we shall fight on the seas and oceans... we shall defend our Island, whatever the cost may be... we shall never surrender.'). After this speech there are sounds of police cars and bells from the London's Big Ben clock tower. All these parts might be ingredients for an overture.

But why is it a Fools Overture? And ... who is the fool!? And why play the notes under this title "The Star Spangled Banner?" Is there a relation to the United States & the back cover?

The back cover is a mystery itself. The same scene with the same grand piano. But what happened with the photo picture?

The partiture of Fool's Overture seems to be the centre for a big crack. From without the The Star Spangled Banner-notes!

What was it that disturbed this quiet moment?

Is there some criticism on the U.S., was Fools Overture just an 'idée-fixe' for a dreamer or does it simply suggest that Supertramp might become the next star in the U.S.!? 'We will never surrender!?' 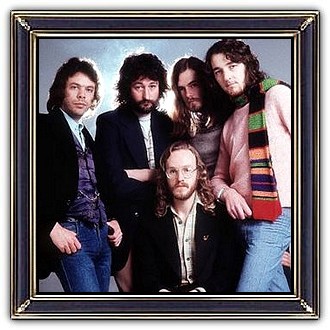 Supertramp are an English rock band formed in 1969 under the name Daddy before renaming themselves in early 1970. Their music is a combination of traditional rock, pop and art rock. The band's work is marked by the songwriting of founders Rick Davies and Roger Hodgson and the prominent use of Wurlitzer electric piano and saxophone.

Supertramp sold 60 million albums worldwide and had a number of major hits, including Hodgson's songs 'Give a Little Bit', 'The Logical Song', 'Take the Long Way Home', 'Dreamer', 'Breakfast in America', 'It's Raining Again', and Davies' songs, 'Bloody Well Right', 'Goodbye Stranger', and 'Cannonball'. Since co-founder Hodgson's departure in 1983, Rick Davies has led the band by himself.

Crime of the Century | Breakfast in America