The original Art was gold imprinted on a textured, faux-leather gatefold cover. The 'Old timey' looking photograph of the band is pasted on front cover.

The back cover was blank; just the faux-leather. Drummer Dallas Taylor and bassist Greg Reeves are credited on the cover with their names in slightly smaller typeface.

There was also an alternate photo for the front cover that didn't make it in the end.

The inside, also pasted on the faux - leather, is a compilation of photos of the musicians. It also contains the track listing and other trivia. 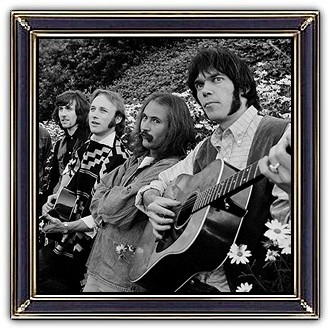 They are noted for their intricate vocal harmonies, often tumultuous interpersonal relationships, political activism, and lasting influence on US music and culture

Prior to the formation of CSN, each member of the band had belonged to another prominent group. David Crosby played guitar, sang and wrote songs with the Byrds; Stephen Stills and had been a guitarist, keyboardist, vocalist and songwriter in the band Buffalo Springfield (which also featured Neil Young); and Graham Nash had been a guitarist, singer and songwriter with the Hollies.