The album cover is recognizable for featuring an Andy Warhol print of a banana. Early copies of the album invited the owner to "Peel slowly and see", and peeling back the banana skin revealed a flesh-colored banana underneath.

A special machine was needed to manufacture these covers. MGM paid for costs figuring that any ties to Warhol would boost sales of the album.

When the album was first issued, the main back cover photo (taken at a performance of Warhol's event Exploding Plastic Inevitable) contained an image of actor Eric Emerson projected upside-down on the wall behind the band. Having recently been arrested for drug possession and desperate for money, Emerson threatened to sue over this unauthorized use of his image, unless he was paid.

Rather than complying, MGM recalled copies of the album and halted its distribution until Emerson's image could be airbrushed from the photo on subsequent pressings. Copies that had already been printed were sold with a large black sticker covering the actor's image.

The inside sleeve depicts photo's of the bandmembers, the tracklist of both sides and some media reviews. Click image to enlarge

'Not since the Titanic ran into that iceberg has there been as when Andy Warhol's Exploding Plastic Inevitable burst upon the audiences at the Trip Tuesday. For once a Happening really happened....' - Los Angeles Times

In 1965, after being introduced to the Velvet Underground by filmmaker Barbara Rubin, Andy Warhol became the band's manager and suggested they use the German-born singer Nico (born Christa Päffgen) on several songs.
Warhol's reputation helped the band gain a higher profile. He helped the band secure a recording contract with MGM's Verve Records, with himself as nominal 'producer', and gave the Velvets free rein over the sound they created. 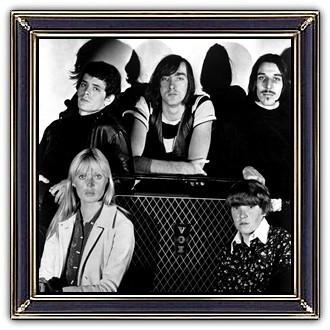 The band, active between 1965 and 1973, was briefly managed by pop artist Andy Warhol, serving as the house band at the Factory and Warhol's Exploding Plastic Inevitable events from 1966 to 1967.

The Velvet Underground & Nico (with German-born singer and model Nico), was released in 1967 to critical indifference and poor sales but has become critically acclaimed; Rolling Stone called it the "most prophetic rock album ever made."