The intertwining cover painting of David Anstey could be viewed with thematic coherence from all angles. It is a collage-type painting containing many colorful images, that upon close inspection, reveals a spaceship, an hourglass, a woman’s facial features, a few facial profiles, knights on horseback, a solar eclipse and many other references to times past and future.

Anstey set the arty standard for all of The Moody Blues’ albums. Pick any record from the band’s career, and you’ll find some complicated art demanding analysis.

Justin Hayward about the artwork:

'I find that artwork quite difficult to look at, to be quite honest, because there was so much going on. It was reduced in scale
from David Anstey’s original picture. He was just thrown this idea, and we met him in a pub and told him about our songs, and he knocked that out. It was all very quick and very cheap. I think, after that, we realized the potential of sleeves, because a lot of other bands were doing it, as well.' 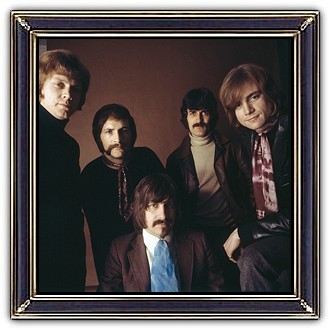 The Moody Blues are an English rock band. They first came to prominence playing rhythm and blues music, but their second album, Days of Future Passed, which was released in 1967, was a fusion of rock with classical music and established them as pioneers in the development of art rock and progressive rock. It has been described as a landmark and one of the first successful concept albums".

The Moody Blues became known internationally with singles including Go Now, Nights in White Satin, Tuesday Afternoon and Question. They have been awarded 18 platinum and gold discs. Their album sales total 70 million.