The original pressing contains Braille lettering of Wonder's name and the album title, along with a message on the inside gatefold which was not transcribed until the 2000 pressing:

'Here is my music. It is all I have to tell you how I feel. Know that your love keeps my love strong.' - Stevie

Other editions have the wonderful (cover) photos of Stevie printed on the vinyl itself. 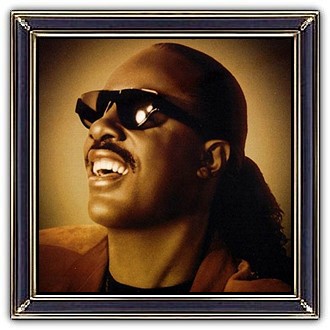 Stevland Hardaway Morris (born: May 13, 1950), known by his stage name Stevie Wonder, is an American musician, singer, songwriter, record producer, and multi-instrumentalist. A child prodigy, he is considered to be one of the most critically and commercially successful musical performers of the late 20th century. Wonder signed with Motown's Tamla label at the age of 11, and he continued performing and recording for Motown into the 2010s. He has been blind since shortly after birth.

Among Wonder's works are singles such as Superstition, Sir Duke, You Are the Sunshine of My Life and I Just Called to Say I Love You; and albums such as Talking Book, Innervisions and Songs in the Key of Life. He is the most ever awarded male solo artist, and has sold over 100 million records worldwide.