Edward Mitchell of 'the Blues', a British Rock Magazine wrote: 'The cover art is a big part of what makes the album so special.'

And indeed the front cover art by Brad Holland is iconic. It depicts Stevie playing his guitar within a beautiful play of light and shadow. Even the lettering and the music notes follow the art. (Read 'sketches' about how it all started)

note:
Very rare, but the name of Holland is also printed on the front (bottom right)

Unfortunately; this nice piece of art of the front is in great contradiction with the plain backcover. Stevie was an up coming artist; maybe there was no money for it.

Brad Holland was told that Stevie Ray wanted to be portrayed in a western get-up; riding a horse with his guitar slung over his back. After some charcoal sketches Brad was not satisfied about this idea. He told the art director that this whole idea was old fashioned and that a more straight-forward painting would be better.

The problem was that Brad only was given a crummy Polaroid of Stevie Ray playing his guitar to work from. But this didn't work out so he told him that if he wanted the guy on the cover to look like Stevie Ray, he'd have to fetch him in from Texas and send him down to Brad's studio.

And so it happened - an iconic art work came to life! 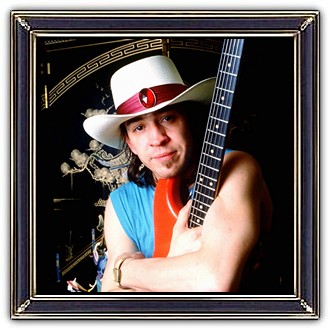 Stephen Ray Vaughan (October 3, 1954 – August 27, 1990) was an American musician, singer, songwriter, and record producer. He was an influential guitarist, and one of the most important figures in the revival of blues in the 1980s.

Late 1977 he formed his own group, Triple Threat Revue, before renaming the band Double Trouble after hiring drummer Chris Layton and bassist Tommy Shannon. He gained fame after his performance at the Montreux Jazz Festival in 1982, and in 1983 his debut studio album, Texas Flood,which sold over half a million copies.