The cover photo by Raeanne Rubenstein, one shot divided over front and back, features a pretzel seller. Pretzel is food in a form of twist. This is undoubtly the connection with a part of the album title. Pretzel logic, however, stands for twisted logic or logic that goes nowhere; invalid logic. Maybe here's a connection with the misspelling of the word pretzels on the seller's car.

According to Donald Fagen the lyrics of the title song are about time travel. Is time travel possible or just a perfect example of pretzel logic!?

Raeanne Rubenstein, a photographer of musicians and Hollywood celebrities, shot the photo in New York on the west side of Fifth Avenue and 79th Street, just above the 79th Street Transverse (the road through Central Park), at the park entrance called "Miners' Gate" 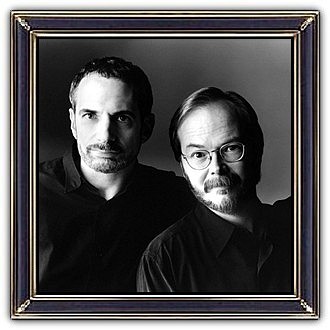 Steely Dan is an American jazz rock band whose music also blends elements of funk, R&B, and pop. Founded by core members Walter Becker and Donald Fagen in 1972. The band enjoyed great critical and commercial success starting from the early 1970s until breaking up in 1981. Rolling Stone has called them the perfect musical antiheroes for the Seventies. Steely Dan reunited in 1993 and has toured steadily ever since. Recorded with a revolving cast of session musicians, Steely Dan's music is characterized by complex jazz-influenced structures and harmonies.

Becker and Fagen are also known for their near-obsessive perfectionism in the recording studio. Over the year they took to record Gaucho (1980), an album of just seven songs, Becker and Fagen hired at least 42 studio musicians and 11 engineers.