The front cover features bandmember Bryan Ferry's then-girlfriend, model Jerry Hall, on rocks near South Stack, Anglesey. The idea for the location was Bryan Ferry's, after he saw a TV documentary about lava flows and rock formations in Anglesey, in which South Stack was heavily featured.

The back cover shows pencil drawings of the band members, the tracklisting and other trivia of the album.

Graham Hughes, working during August 1975, took the cover photo directly below the central span of the bridge on a south-side slope. He worked from sketches produced by Anthony Price, with photography featuring Hall striking various poses. 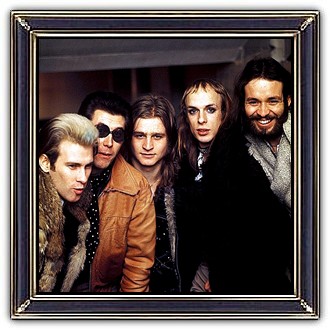 Roxy Music were an English rock group formed in 1971 by Bryan Ferry, who became the group's lead vocalist and chief songwriter, and bassist Graham Simpson. Alongside Ferry, the other longtime members were Phil Manzanera (guitar), Andy Mackay (saxophone and oboe) and Paul Thompson (drums and percussion).

The band were highly influential as pioneers of the more experimental, musically sophisticated elements of glam, early English punk and new wave music

Although the band took a break from group activities in 1976 and again in 1983, they reunited for a concert tour in 2001, and toured together intermittently between that time and their break-up in 2011. Ferry frequently enlisted members of Roxy Music as session musicians for his solo releases.