the Rolling Stones - Black and Blue

I've always wondered what Keith is whispering in Mick's ear and why three of the band members are posed on the front cover and two on the back cover.

Nevertheless it is Classic Album Art and with this cover shot taken by Hiro, the Japanese fashion photographer, it all harks back to album covers from early days of the Stones’ career.

The album was promoted with a controversial billboard on Sunset Boulevard in Hollywood that depicted the model Anita Russell, bruised and bound (by Mick Jagger) under the phrase “I’m Black and Blue from the Rolling Stones — and I love it!”

The billboard was removed after protests by the feminist group Women Against Violence Against Women, although it earned the band widespread press coverage. 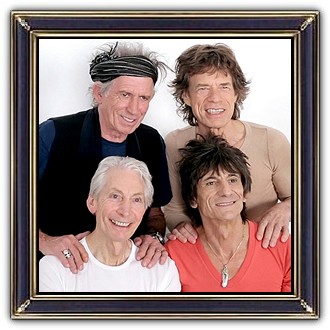 The Rolling Stones are an English rock band formed in London in 1962. The first settled line-up consisted of Brian Jones (guitar, harmonica), Ian Stewart (piano),Mick Jagger (lead vocals, harmonica), Keith Richards (guitar), Bill Wyman (bass) and Charlie Watts (drums). The band are identified with the youthful and rebellious counterculture of the 1960s. They made blues a major part of rock and roll.

The albums Beggars' Banquet (1968), Let It Bleed (1969), Sticky Fingers (1971) and Exile on Main St. (1972) are generally considered to be the band's Golden Age. Some Girls (1978) and Tattoo You (1981) are their two most sold albums worldwide. They have released twenty-nine studio albums, eighteen live albums and numerous compilations and their estimated sales are above 200 million.