Queen - News of the World

The album's cover was a painting by American sci-fi artist Frank Kelly Freas. Drummer Roger Taylor had an issue of Astounding Science Fiction (October 1953) whose cover art depicted a giant intelligent robot holding the dead body of a man. The caption read: 'Please... fix it, Daddy?' to illustrate the story 'The Gulf Between' by Tom Godwin.

The painting inspired the band to contact Freas, who agreed to alter the painting for their album cover, by replacing the single dead man with the four 'dead' band members (with Taylor and Deacon falling to the ground, and Taylor only visible on the back cover)

The inner cover (gatefold) has the robot extending its hand to snatch up the petrified fleeing audience in the shattered auditorium where the corpses were removed.

Freas said he was a classical music fan and did not know Queen, and only listened to the band after doing the cover because he thought he might just hate them, and it would ruin his ideas.

The giant robot from the album cover, also known as 'Frank', was used as a special effect during the songs We Will Rock You and Killer Queen for the 2017–18 Queen + Adam Lambert Tour, which was in celebration of the album's 40th anniversary. 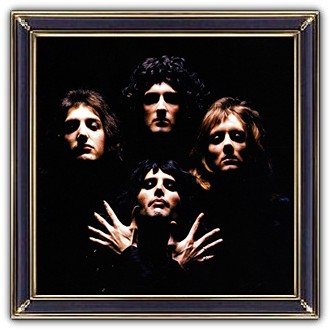 A Night at the Opera | Greatest Hits