Pearls before Swine - One Nation Underground

The band used fragments of the right panel of the famous triptych by Hieronymus Bosch called 'The Garden of Earthly Delights'.

> This right panel presents a hellscape; a world in which humankind has succumbed to the temptations of evil and are reaping eternal damnation. Set at night, the panel features cold colours, tortured figures and frozen waterways. The nakedness of the human figures has lost any eroticism suggested in the central panel, as large explosions in the background throw light through the city gate and spill onto the water in the panel's midground. 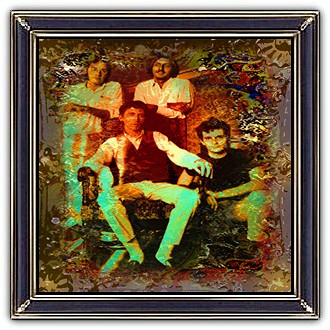 Pearls Before Swine was an American folk, psychedelic rock band formed by Tom Rapp in 1965 in Eau Gallie, now part of Melbourne, Florida. They released six albums between 1967 and 1971, before Rapp launched a solo career.