Peter Coriston and Mike Doud did the album design of this wonderful and surprising cover. Referring to the title of the album they had an idea, so they were looking for a building that was symmetrical, with interesting details. They found it at 96 and 98 St. Mark's Place in New York City. The two five-storey buildings were photographed by Elliot Erwitt.

The original photographs underwent a number of tweaks so it would fit the traditional square album cover. The fifth floor of the building had to be cropped out and the buildings to the left and right were also changed. Tiles were added on the roof section along with more faces. Part of the top right railing balcony was left out for a whole window frame to be visible.

The front cover is a day time shot; the back cover was taken at night. The original back and front of the album featured the building and the next step in its design was 'the windows cut out'.

The album included two inners (for each disc) and a third overall insert. These two disc inners show a set of American icons and a range of Hollywood ephemera. Pictures of W.C. Fields and Buzz Aldrin alternated with the snapshots of Led Zeppelin. The third insert cover is white and details all the album track listings and recording information but also the title of the album, spelling out the name 'Physical Graffiti'.

All this made it possible to connect the inner & outer cover: Physical Graffiti indeed

In 1976 the album was nominated for a Grammy Award in the category of best album package. 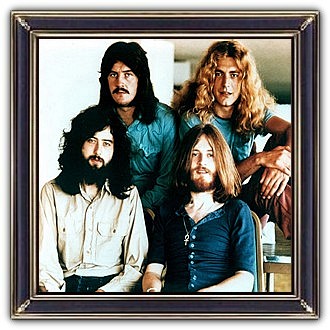