With their makeup and costumes, KISS took on the personas of comic book-style characters:

Stanley became the Starchild because of his tendency to be referred to as the starry-eyed lover and hopeless romantic. Criss' Catman makeup was in accordance with the belief that he had nine lives because of his rough childhood in Brooklyn. The Demon makeup reflected Simmons' cynicism and dark sense of humor, as well as his affection for comic books. Frehley's Spaceman makeup was a reflection of his fondness for science fiction and his supposedly being from another planet. 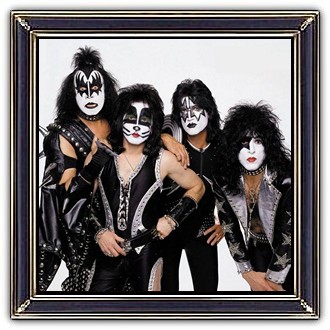 With their make-up and costumes, they took on the personae of comic book-style characters: The Starchild (Stanley), The Demon (Simmons), The Spaceman or Space Ace (Frehley), and The Catman (Criss). Due to creative differences, both Criss and Frehley had departed the group by 1982. They sold 100 million records worldwide.