The front cover, photographed by Barry Feinstein in Los Angeles, shows Joplin reclining on her Victorian era loveseat with a drink in her hand.

Due to the fact that it was a posthumous album, it is exact the Joplin as we should remember her. A pearl indeed!

Joplin sang on all tracks except 'Buried Alive in the Blues', which remained a Full Tilt Boogie instrumental because she died before adding vocals, but she approved the instrumental track. The recording sessions, starting in early September, ended with Joplin's untimely death on October 4, 1970. Her final session, which took place on Thursday, October 1 after a break of several days, yielded her a cappella 'Mercedes Benz'.

The back cover shows the Full Tilt Boogie Band who accompanied her on the Festival Express, a concert tour by train of Canada, in the summer of 1970.

On Sunday, October 4, 1970, producer Paul Rothchild became concerned when Joplin failed to show up at Sunset Sound Recorders for a recording session. Full Tilt Boogie's road manager, John Cooke, drove to the Landmark Motor Hotel in Hollywood where Joplin was staying. He saw Joplin's psychedelically painted Porsche 356C Cabriolet in the parking lot. Upon entering Joplin's room (#105), he found her dead on the floor beside her bed. 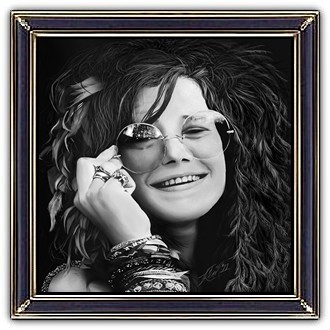 Janis Lyn Joplin (January 19, 1943 – October 4, 1970) was an American singer considered the premier female blues vocalist of the Sixties; her raw, powerful and uninhibited singing style, combined with her turbulent and emotional lifestyle, made her one of the biggest female stars in her lifetime. Joplin rose to fame in 1967 during an appearance at Monterey Pop Festival, as the lead singer of the then little-known San Francisco psychedelic rock band Big Brother and the Holding Company. After releasing two albums with the band, she continued as a solo artist.

Janis died of a drug overdose in 1970 after releasing three albums. A fourth album, Pearl, was released a little more than three months after her death, reaching number 1 on the charts. Joplin is one of the top-selling musicians all time.