Iron Maiden - Number of the Beast

The painting, by Derek Riggs, was originally created for the song "Purgatory", but Rod Smallwood deemed it of too high a calibre for a single release and decided to save it for The Number of the Beast.

The album was also the centre of controversy, particularly in America, due to the lyrics of the title track and the cover art depicting Eddie controlling Satan like a puppet, while Satan is also controlling a smaller Eddie. Smallwood explains that the concept was to ask 'who's the really evil one here? Who's manipulating who?'

According to Riggs this was inspired by a Doctor Strange comic book 'which had some big villain with Doctor Strange dangling on some strings like a puppet, it was something I read as a child back in the 1960s I think', while the images of hell were 'taken from my knowledge of medieval European Christian art.'

Eddie, also known as Eddie the Head, is the mascot for Iron Maiden. Designed by Derek Riggs, he is a perennial fixture of the group's artwork, appearing in all of their album covers (as well as most of their singles) and in their merchandise.

Eddie was based on the zombie-like figure that appears on the sleeve of the group's first single, "Running Free."

Eddie's image has evolved and regressed throughout the years, largely due to the contributions of artists other than Riggs. Beginning with 1992's Fear of the Dark, Eddie has taken on occasionally more demonic portrayals, but his most popular imagery remains the cartoon zombie.

Some more Eddie through the years 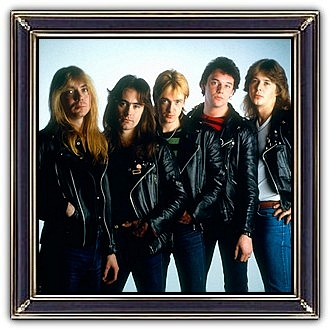 Iron Maiden are a British heavy metal band formed in Leyton, East London, in 1975 by bassist and primary songwriter Steve Harris. The band is considered as pioneers of the new wave of British heavy metal. After several line-up changes, the band had a series of UK and US platinum and gold albums in the eighties. The Number of the Beast (1982) was their first in line on which they introduced Eddie as Cover Art.

Since the return of lead vocalist Bruce Dickinson and guitarist Adrian Smith in 1999, the band have undergone a resurgence in popularity. The band's discography has grown to thirty-eight albums, including sixteen studio albums, eleven live albums, four EPs, and seven compilations. Their sixteenth studio album, The Book of Souls, was released on 4 September 2015.