Eagles - On the Border

Gary Burden bought a painting at a rummage sale for $.25. He just liked it without knowing it was the original painting or who the artist was. When it came time to create the artwork for On The Border he suggested this one to the band for the album cover. Everyone agreed that it would be perfect.

After some research Burden found out who the artist was: renowned Navajo artist Beatien Yazz. The record company sent a sizable check to the artist and they never heard if he got it or not. If so it must have come as a surprise, money out of the blue. Burden still has the original painting and concludes that it still is a beautiful thing. In fact: now it’s a famous beautiful thing.

Just letting you know, the cover artist for the Eagles On the Border is my father, Beatien Yazz a.k.a. Jimmy Toddy. He did get the check in the mail via the Wide Ruins Trading Post; Wide Ruins, Arizona. He was so honored and surprised to have his art featured on an album cover. He still resides in Wide Ruins, and now retired from painting. He is now 86 years old, and the internet features a lot of his work as well. His works are also in many private and public collections.

I am very much interested on knowing if you would be willing to sell the album cover? I am also an illustrator and painter as well. My works can be seen at several websites. 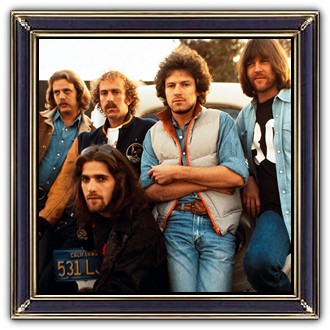 The Eagles were an American rock band formed in Los Angeles in 1971 by Glenn Frey, Don Henley, Bernie Leadon and Randy Meisner. They released their Self-titled debut album in 1972, Desperado (1973), On the Border (1974 - adding guitarist Don Felder), One of These Nights (1975), Hotel California (1976 - their commmercial peak) and The Long Run (1979). Line up changes: Joe Walsh - Bernie Leadon (Hotel California). Timothy. B. Smitt - Randy Meisner (after the Hotel California Tour).

The Eagles disbanded in July 1980 but reunited in 1994 for the album Hell Freezes Over, a mix of live and new studio tracks. In 2007, the Eagles released Long Road Out of Eden, their first full studio album in 28 years and their sixth number one album. The Eagles have sold more than 150 million records world wide.

Desperado | One of These Nights | Hotel California