The front cover, painted by Neville Garrick, boasts a sketch of the sun rising over a high mountain with a huge Rasta man raising his arms in triumph. Yet, the album’s cover completely contrasts what was going on in Marley’s life; his struggle against cancer. Less than one year after the release of the album, the death of Jamaica’s favourite shook the world.

The back cover depicts also a sun surrounded by song titles and lyrics, and other trivia of the album. In the center of the sun a photo of Marley & the Wailers shot by Adrian Boot. And perhaps, considering Marley's illness, it is a sunset instead of a sunrise. As if Marley knew his fate. Nevertheless; both music, lyrics and art were sparkling and convincing. Marley's last message to the world.

The promotional postcard was signed by Marley and two members of the Wailers at an after-party in London. Bearing the inscriptions 'One Love Rasta Bob Marley', 'All The Best Neville Brown' and 'One Love Sis Judith', the card was offered with a piece of Marley’s dreadlock to the fan along with his signature. The two items sold together at Christie’s in April 2003 for $4,115.

The original ink and watercolour artwork created by Neville Garrick for the cover of Marley’s Uprising. It has been sold at Christie’s in New York in December 2006 for $6,000. 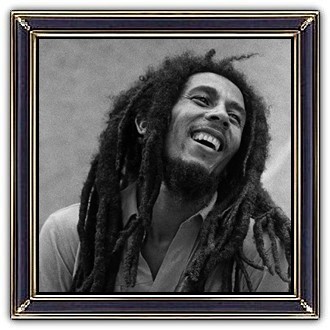 Robert Nesta "Bob" Marley (6 February 1945 – 11 May 1981) was a Jamaican reggae singer, songwriter, musician, and guitarist. Starting out in 1963 with the group The Wailers, he forged a distinctive songwriting and vocal style that would later resonate with audiences worldwide. After the Wailers disbanded in 1974, Marley pursued a solo career that culminated in the release of the album Exodus in 1977 (with sales of more than 75 million records).

Marley was a committed Rastafari who infused his music with a sense of spirituality. He is considered one of the most influential musicians of all time and credited with popularizing reggae music around the world, as well as serving as a symbol of Jamaican culture and identity. Marley has also evolved into a global symbol.