A witch-like figure in front of the mill and the use of red shades transforms this idyllic place into a dark and sinister place of the Middle Ages. 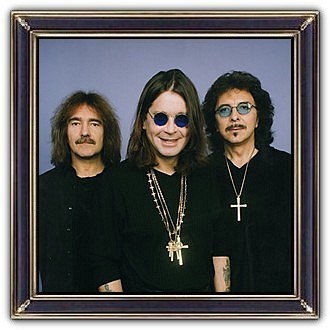 Black Sabbath is an English rock band, formed in Birmingham in 1968. The group soon began incorporating occult themes with horror-inspired lyrics and tuned-down guitars but also composed songs dealing with social instability, political corruption, the dangers of drug abuse and apocalyptic prophecies of the horrors of war.

Osbourne's regular abuse of alcohol and other drugs led to his dismissal from the band in 1979. The original line-up reunited with Obourne in 1997. Black Sabbath are often cited as pioneers of heavy metal music with releases such as Black Sabbath (1970), Paranoid (1970) and Master of Reality (1971). They were ranked by MTV as the 'Greatest Metal Band' of all time.