The front cover was painted by Brian Hagiwara and depicts a street corner that could be 'Anytown USA', although the street lamp is a popular type found in California. The painting has similarities to some of Edward Hopper's work, such as Nighthawks - a mostly deserted street, large areas of flat color and an overall feeling of little movement.

The back cover, a photograph by Jim Marshall, has a portrait of a barefoot Joel sitting in a chair looking unhappy. Joel himself says that he had his wisdom teeth removed two days prior to the shoot. 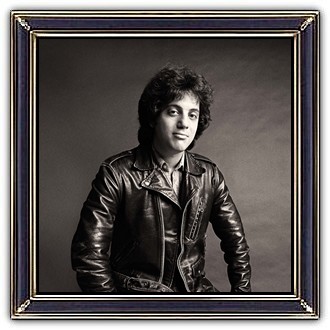 William Martin 'Billy' Joel (born May 9, 1949) is an American pianist, singer-songwriter and composer. Since releasing his first hit song, 'Piano Man', in 1973, Joel has become the sixth best-selling recording artist and the third best-selling solo artist in the United States with Top 40 hits in the 1970s, 1980s, and 1990s all of which he wrote himself. He is also a six-time Grammy Award winner. He has sold more than 150 million records worldwide, making him one of the best-selling artists of all time.

With the exception of the 2007 songs 'All My Life' and 'Christmas in Fallujah', Joel stopped writing and releasing pop/rock material after 1993's River of Dreams. However, he continues to tour, and he plays songs from all eras of his solo career.