The Australian version of the cover by Kettle Art Productions is by far most appealing to the imagination. Beautiful comic art. The front depicts Agnus and Malcolm Young and the back the other band members.

The international version by Hipgnosis has the best cover story and gives a nice insight about the artistic techniques that makes Hipgnosis so creative and spcial in approaching art design. Here is the story told by Hipgnosis' photographer Aubry Powell:

'I remember two skinny little Australian guys (Agnus and Malcolm) coming into Hipgnosis’ studio, and I thought, “These guys aren’t going to amount to a hill of beans.” I really did. They were funny little guys and they started saying, “We need an album cover.”

I was going to L.A. the next day and I said, “Well, why don’t I shoot something in L.A.?” And Storm (Thorgerson) called me when I got there and said, “I’ve got an idea. Remember those exposé magazines like National Enquirer, where they used to black out people’s eyes so you wouldn’t know who they were but you did really?”

I said, “I’m just down the road from Sunset Strip where there’s sleazy motels. Why don’t we shoot something there and we’ll get a load of characters?” I shot the background there, flew back to England, and we hired a bunch of models and dressed them up in different stuff, outfits, put them in Hipgnosis studios and then created this collage all the way across, as they are standing in front of it.

The result is a perfect example of Hipgnosis work where everything is shot front to back, not how the eye sees it.

So everybody (and even the background) is in sharp focus, yet the composition is as if they were there for real. That’s what gives it that surreal, almost painted kind of atmosphere to it.' 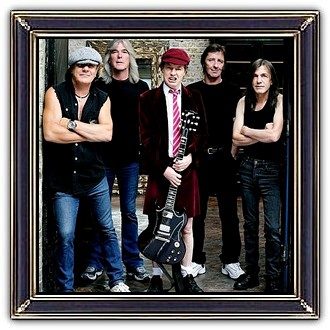 AC/DC are an Australian hard rock band, formed in November 1973 by brothers Malcolm and Angus Young, who continued as members until Malcolm's illness and departure in 2014. Commonly referred to as a hard rock or blues rock band, they are also considered pioneers of heavy metal, though they have always dubbed their music as simply 'rock and roll'.

AC/DC underwent several line-up changes before releasing their first album, High Voltage (1975). Lead singer and co-songwriter Bon Scott died on 19 February 1980. The group considered disbanding but decided to continue and set about finding a new vocalist: Brian Johnson. Later that year, the band released the new album Back in Black; a tribute to Bon Scott. The album became their all-time best-seller. AC/DC has sold more than 200 million records worldwide.