On the front the title of the album. On the back the tracknames of side 1 and side 2. A little 'out of theme' is the photo of the bandmembers on the back by John Gellman. 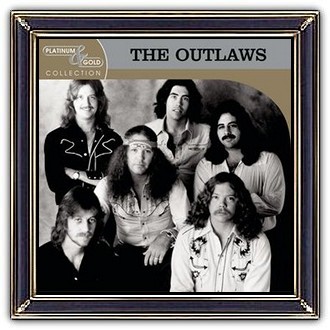 The Outlaws are a Southern rock/country rock band formed in Tampa, Florida in late 1967 by guitarist–vocalist Hughie Thomasson, drummer David Dix, bassist Phil Holmberg, guitarists Hobie O'Brien and Frank Guidry, plus singer Herb Pino. Guidry owned the name the Outlaws. He had been in a band using that name. The band has an amazing number (35+) of line-ups. None of the founding members is still present.

The band is band best known for their 1975 hit There Goes Another Love Song, as well as the song Green Grass and High Tides, from the album Outlaws, plus their 1980 cover of the Stan Jones classic (Ghost) Riders in the Sky.